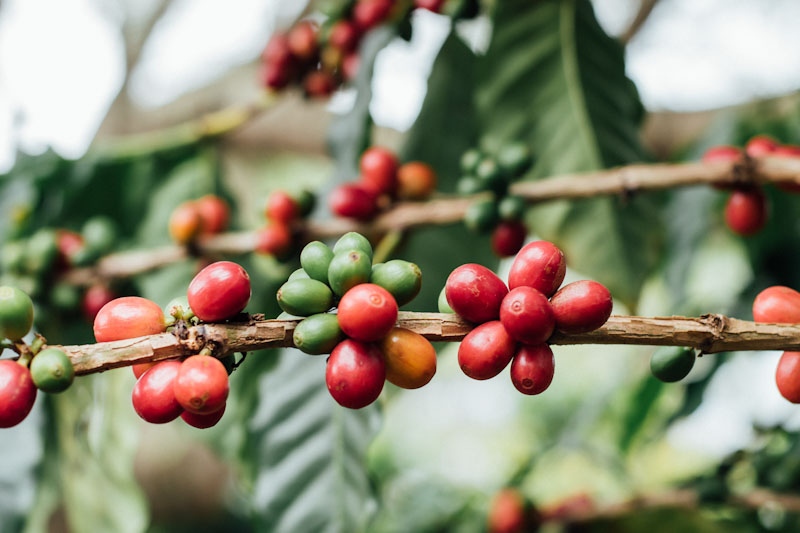 Coffee is so much more complex than what we know. Besides the fact that coffee from each country (origin) tastes different from one another…there are also different coffee varietals from each origin. The characteristics of a cup of coffee are not only determined by the origin of the bean, but also by its varietal (variety or cultivar).

Think of wine…varietal is a term that is used in the wine industry to describe a wine made from a specific variety of grape, like Pinotage, Shiraz or Merlot. These varietals give the wine a specific taste and profile, and this also happens with coffee.
There are so many different varietals all over the world, but I will focus on the ones found in Colombia…since Colombia is what we are all about.

Production, resistance to biological factors (insects) and climate problems (frost) plays a key role in the decision making of which varietal of coffee to plant on the farmer’s land. However, this is changing as more and more farmers are focusing more on higher cup quality profile.

The most familiar varietal. It is the grandfather of modern varieties, most of the coffee varietals have been developed from Typica. Many of the developed varietals produce a much higher yield than Typica, but you find that amongst all the other varietals, Typica produces an excellent cup quality.

This variety produces round, clean and a sweet cup of coffee.
It has longer seed than its brother cultivar, Bourbon and it’s mainly used in Central America, Jamaica and Indonesia.

The brother of Typica, has no relation to the brown adult beverage other than its name. The name comes from the French, who planted this varietal on the Island of Reunion (back then known as Ilé Bourbon).

Bourbon produces 20-30% more yield than Typica and is known to be the Pinot Noir of coffee. It is well known in the world of specialty coffee for producing a distinct and sweet cup profile. We know Bourbon for its fruity characteristics and bright acidity, like wine.

There is a wide range of cup profiles from all over the world where Bourbon is growing, including different varieties and mutations, such as Yellow, Red and Orange Bourbon. The Yellow Bourbon variety appears to be more productive than the Red Bourbon.
The berries have a less conical shape and it matures quite fast. Bourbon is mostly planted and used in Brazil however, it is now used all over Central America.

A natural mutation of the Red Bourbon varietal; it was first found in the town of Caturra in Brazil. Since this coffee shrub is shorter, it has a higher yield potential and it’s also more resistant against diseases.

Caturra is famous for its bright acidity and low-to-medium body. It has less clarity and sweetness than Bourbon.
Although this varietal was first developed in Brazil, we now find it throughout Colombia, Costa Rica and Nicaragua, as it has adapted very well to the growing conditions of these countries.

Often misspelt as Geisha, its name and origin come from a town called Gesha, in Ethiopia.
This elegant, long-leafed plant is low-yielding and needs the right conditions to truly shine. Gesha is picky, it will only grow when, where and how it wants…in tiny microclimates. A great Gesha is very aromatic, with floral notes and a balanced juicy sweet acidity.

At a blind tasting, this coffee will often be described as…WOW.

A great example of many aspects of coffee varieties/cultivars and development.

Castillo is a Colombian variety that was developed in 2005 by Cenicafe, the research arm of the Colombian Coffee Growers Federation.
Castillo resulted from cross-fertilisation between Caturra (the male parent) and a hybrid of Timor (the female parent). The Castillo variety is the flag of the program “Colombia sin Roya” (Colombia without Rust), aimed at recovering and renewing the production of high-quality coffee in Colombia. It also produces high yields which makes it a superb choice for producers.

Even though in the past Castillo did not feature in top-quality coffees, current alternative processing and drying methods from several specialty coffee farmers have put Castillo back in the spotlight.
We know Castillo for its citric acidity, smoothness and aroma. Fruity, winey, raw sugar cane, and marshmallow notes can be found on the unique natural Castillo we will bring to South Africa this year!

Also known as Variedad Colombia, this variety was developed by Cenicafe by crossing Caturra and the Timor Hybrid, in Colombia. Developed before the first leaf rust outbreak in Colombia in 1983 and is know that this variety helped save the country’s coffee industry.

Colombia produces a high yield and is well resistant to diseases, making it very popular for small farms.

As the years have passed, this variety has improved and has been the breeding base for the Castillo and Tabi cultivars. Caramel, chocolate and hints of cherry comes forward when tasting this coffee. Also described to be a sweet, bright and a full-bodied bean.

A variety developed and released in 2020 in Colombia by Cenicafe by crossing the varietals; Bourbon, Typica and the Timor Hybrid. The Tabi varietal is very similar to Bourbon and Typica, being tall with long branches however, its fruits and seeds are slightly larger. It adapts very well to high altitudes, perfect for the mountainous regions in Colombia.

One of the most important qualities of Tabi is its resistance to coffee leaf rust however, it also presents great cup quality characteristics like its parents, Bourbon and Typica.
The name Tabi means “good” in the Guambiano (a native Colombian tribe) dialect.

We will soon release Tabi to South Africa, and boy are we excited!

As I mentioned before, there are so many different types of varietals and I have not even covered half of them, but this article can give you an idea of the complexity of coffee and why it is so unique. One of the many reasons why we love coffee!

The Coffee Dictionary (by Maxwell Colonna-Dashwood)

Mercanta, The Coffee Hunters – About Varieties